We would like to announce a change to our usual rules for the maps played during the regular 6v6 Autumn 2022 season for Premiership division. Instead of having a map pool consisting of seven maps, with a fixed rotation, there will be weekly pick and bans from a set of 5 maps to decide which two are played in a match.

The map pool for the Premiership Division will be the following:

For Premiership Qualifiers, the map pool will consist of the first eight maps of that list (meaning all of the maps except the last one, that will be decided later on).

The following pick-and-ban system will be used during the regular season for the Premiership division:

Division 1 players will be offered the choice to use either set of rules and map pool for the whole season after the end of Division 1 signups.

Teams have to announce on the match pages the results of the pick/bans (meaning the maps that will be played) at least 48 hours before the official date of the match. If one team reaches out for the pick/ban process and the other team does not respond within the 48 hour pick/ban deadline, the team that reaches out will get the first ban from the other team.

If one of the two teams keeps being uncooperative up until 4 hours before the match is scheduled, the other team will get to choose all the maps for the relevant official.

If there are any issues, contact a League Admin on [ETF2L’s Discord server] as soon as possible. Before the official, match comments must be used to display any official agreements.

We have asked Premiership players for their feedback regarding the following HUD modification being able to show your medic’s ubercharge percentage in the HUD, which will remain banned. 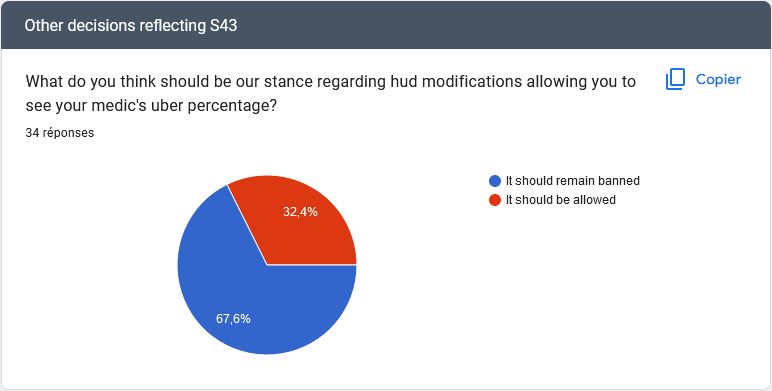 JOIN, FOLLOW AND SUPPORT ETF2L ON OUR SOCIAL MEDIA & KO-FI