After reading some comments on ETF2L and teamfortress.tv following the announcement for our upcoming 6v6 Season 41, we decided to ask our Premiership players, of which 74 out of the eligible 88 responded and voted, for their opinions about the current map pool and general decisions with regards to config settings for mechanics we are considering testing in the Preseason Cup, and potentially changing during the main season.

The first question was about the maps that should be in the pool for Season 41 and allowed for 7 picks, with the following results: 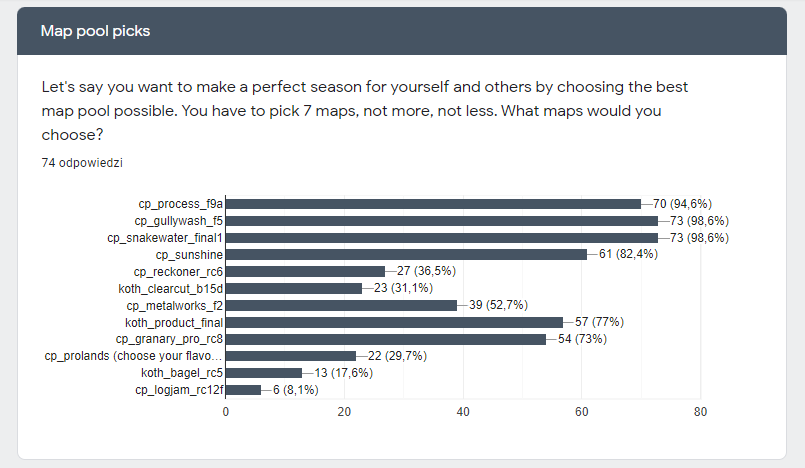 As a result of the answers to this question and after internal discussion, the maps in the next season’s map pool will be:

After that, we went over general game and mechanics changes questions for the upcoming season. The most important one is the Iron Bomber question, obviously.

I have to admit that I messed up during creating this poll by not adding an option for leaving it as is, however, the most important thing we wanted to see here is what config settings we are supposed to test during the Preseason Cup. There were 4 players who responded in the additional feedback field that they would have voted for leaving the Iron Bomber as-is. That being said, this decision may not be definitive, which means we may make one more poll for it before the season start after the Preseason Cup has concluded.

Juho in this video.

With this result, we are going to set sm_empty_active_ubercharges_when_dropped to 1 (enabled) in the preseason cup to disallow this behaviour. After the preseason cup this will be re-evaluated to see whether it stays in play for S41.

The result of next question is also not a huge surprise, as it became clear that having a season in the higher divisions without Market Gardener was way more desired than with it.

The last two questions were related strictly to the single swiss table competitions, namely Premiership and Division 1, on what to do for the playoffs and avoid any confusion by changing our minds mid-season.

With these results, the highest division are going to have a Single Elimination Playoffs with a pick/ban map advantage for the team which had the better score at the end of the regular season.

TwiiKuu) sm_inhibit_extendfreeze 1, which prevents you from having an option to watch the killer on a death cam way longer than you are supposed to be able to.

From this point onwards we are going to use a GitHub repository for storing all ETF2L configs, which means you can get the latest version of the etf2l_configs.zip and etf2l_configs_extra.zip here. This move will additionally allow everyone to keep track of any config changes on this public Git repository (e.g. differences between 1.0.0 and 1.0.1).

The following links to our config releases will be replaced:

The latest rule changes pertain to the bug-using rules, which are in effect immediately for all ETF2L competitions.

Any kind of “Bug-Using” is not allowed. Players abusing exploits and/or map bugs/glitches will be penalized on a case-by-case basis depending on the intent and impact on the matches. Possible penalties may include warnings, forfeiting of one or more match rounds and league bans.

A spot on the map is commonly banned if:

Wallbugs are not considered an exploit unless they meet any of the criteria above.

If you are unsure about the legality of any sneaky spot on a map, please contact an admin on [ETF2L’s Discord server] to clarify the situation and prevent complaints from your opponent.