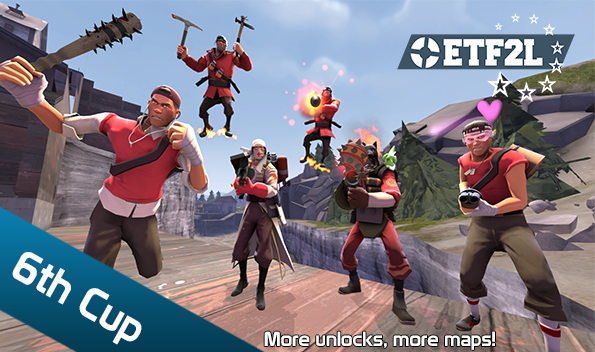 Let’s do a quick head count here, shall we? Raise your hands, those who remember our grand competitions graciously labeled “Cups”. If you did, you might be positively surprised by the news – we at ETF2L would like to revive the tradition we’ve been developing until May 2010 when two of the strongest teams of those times had clashed in the finals of the most recent, 5th Cup. As a league-wide competition, it’ll be a great opportunity for the top tier teams to further strengthen their dominance, but also for the underdogs to rise, shine and undermine the confidence of the old guard. It would also serve as a testing ground for us to give all the new maps a try in a competitive environment to bring in some variety to the scene. And by variety, we also mean *cough* unlocks. Whether you are a group of tryhards or just laid back casuals, it’s about time for you to buckle up and sign up with your 6v6 team for some action!

The winner of this tournament does not only win bragging rights but as well €300 cash.

After a fierce discussion that ensued as an effect of lowering the number of people deciding on the maps being played in the league, we decided that it would be the best to let the experienced teams shine on some of the solid, well-known maps as well as bring in a few yet to be mastered ones to allow the cleverness to ensue. With that said, your map pool for the 6th cup will be:

In every round up until quarter finals, teams shall play one map per match, chosen via the map elimination system [Explanation]

From the quarter finals onwards, teams shall play up to three maps per match in a BO3 format, chosen via the map pick system:

All maps will use the standard 6v6 rules that we used during Season 13 powered by Tt eSPORTS [Rules page]. Since there are only 5cp maps in the pool, every map is played until either one team has a 5 point lead or the 30 minute time limit is hit. In case of a draw after 30 minutes, please play a golden cap round to decide the winner of the map.

When we published the unlock announcement for Season 13, we promised to host a cup with a handful of various unlocks some time after Season 13. To keep that promise, we would like this cup to be an opportunity for the community to take a closer lock at a few selected weapons and gadgets we decided to keep away from our staple 6v6 competitions. With almost countless possibilities, we’ve agreed upon letting in a few of them to be tested and analyzed thoroughly.

Reskins of stock weapons or the weapons mentioned above are allowed as well.