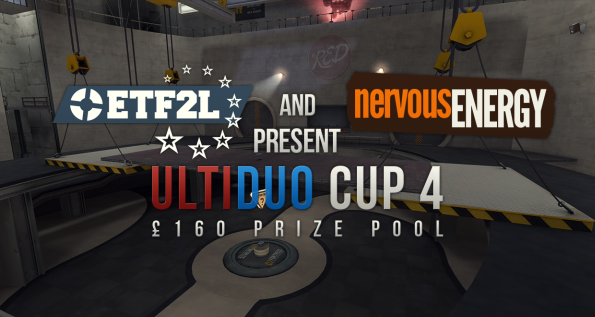 It has been a while, but better late than never.

Monkeh, one of the leaders of the reputable community nervousENERGY (the above banner is a work of

JustMoose, one of their members, thanks for that!), donates £160 as prize for another Ultiduo cup, hosted at ETF2L. Grab your favourite healbot or rocket dispenser and sign up until November 10!

For everyone who never heard the term “Ultiduo” before: One medic and one soldier per team face off on the King of the Hill map koth_ultiduo_r_b7. Whoever holds the central capture point under the bridge for a total of 5 minutes, scores one point. The team that first scores 3 points, wins the map. There are some tactics, such as bombing the enemy medic while the allied medic stays in spawn or suiciding (as medic) if it becomes obvious he is going to die and loose his uber percentage anyway.

The nervousENERGY admins have set up two Ultiduo training servers. You can reach them under the following IPs.

Monkeh from nervousENERGY donated £160 to the prize pool. The distribution is as follows:

The schedule for the group stages and the first rounds will be very tight to finish the whole tournament before the Christmas holidays. All matches will have fixed default dates with the option to reschedule within the deadlines. Extensions will not be granted. All group stage matches that are without result on November 20 @ 23:59 will be nullified. The winner of unplayed knockout matches with no result will be decided with a coin toss, when the deadline is reached.

The default dates for each round will be set as follows (20.30 CET):

In case two teams are tied on one of the two promotion spots after the group stage, the tied teams have to fight a combo (medic and soldier) melee only (no healing or buffs allowed) 2on2 battle and report the result to an admin.

The list of allowed unlocks is very short to make the game as balanced as possible. A whitelist that blocks all other items can be downloaded here. The only allowed unlocks are: